Brewer’s malt is made from germinating barley, so brewers want to know how they should germinate their barley. The following is a portion of a barley germination experiment. Barley seeds were divided into 30 lots of 100 seeds, with each lot germinating under one of ten conditions chosen at random. The ten combinations of weeks after harvest (1, 3, 6, 9, or 12 weeks) and amount of water used in germination are the conditions (4 ml or 8 ml). The number of seeds germinating is the response. We want to know if the timing and/or amount of water affect germination. The data for this problem are in Table 8.1 (Hareland and Madson 1989). Analyze these data to determine how the germination rate depends on the treatments.

Problem 8.2 (For this problem, no calculation, no R, simple tell me whats wrong with this design)

Particleboard is made from wood chips and resins. An experiment is conducted to study the effect of using slash chips (waste wood chips) along with standard chips. The researchers make eighteen boards by varying the target density (42 or 48 lb/ft3 ), the amount of resin (6, 9, or 12%), and the fraction of slash (0, 25, or 50%). The response is the actual density of the boards produced (lb/ft3 , data from Boehner 1975). Analyze these data to determine the effects of the factors on particleboard density and how the density differs from target.

Implantable heart pacemakers contain small circuit boards called substrates. These substrates are assembled, cut to shape, and fired. Some of the substrates will separate, or delaminate, making them useless. The purpose of this experiment was to study the effects of three factors on the rate of delamination. The factors were A: firing profile time, 8 versus 13 hours with the theory suggesting 13 hours is better; B: furnace airflow, low versus high, with theory suggesting high is better; and C: laser, old versus new, with theory suggesting new cutting lasers are better. A large number of raw, assembled substrates are divided into sixteen groups. These sixteen groups are assigned at random to the eight factorlevel combinations of the three factors, two groups per combination. The substrates are then processed, and the response is the fraction of substrates that delaminate. Data from Todd Kerkow

Analyze these data to determine how the treatments affect delamination. 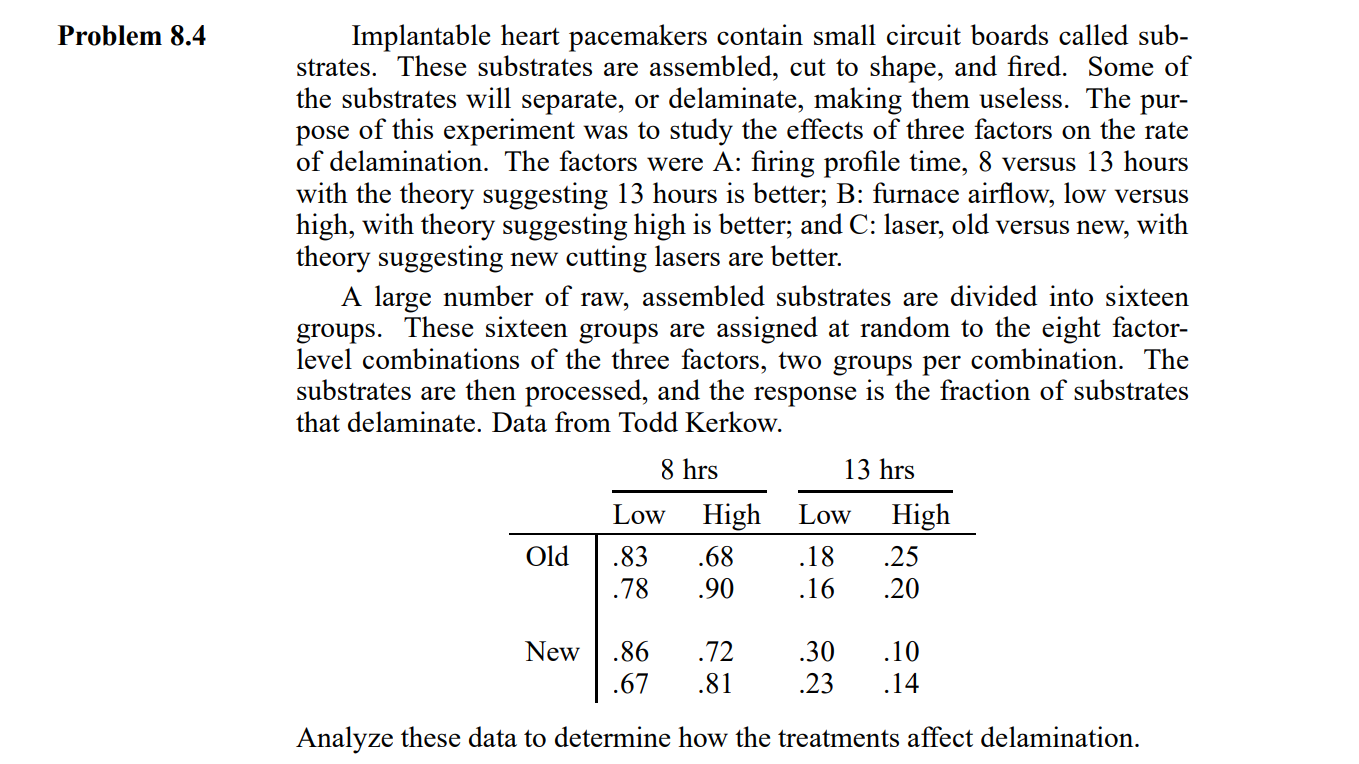 Our average page is

so you get upto 10% more value

If your paper matters, we own all the good words

Getting your paper done is easy when you know the right people.