22-year-old female with past history of uncontrolled type I Diabetes mellitus (Hemoglobin A1C 9.9%), non compliant with medications, presented to the emergency department, with chief complaint of worsening abdominal pain associated with nausea and vomiting for 3 days. She described her abdominal pain as sudden in onset, dull, constant, about 5/10 in intensity and associated with nausea and 4-5 episodes of non bloodyvomiting since the past 3 days. She was frequently eating hamburgers and sausage biscuits at fast food joints. She denied any fever, chills, hematemesis, hematochezia, melena, sick contact, antibiotic use or recent hospitalization. Her examination was remarkable for hypoactive bowel sounds and periumblical tenderness on deep palpation. CT scan of the abdomen on admission showed ileus with small bowel wall thickening concerning for enteritis (See figure series A). Admission labs were remarkable for white blood cell count of 14.3 k/mm3, with 85% neutrophils, Glucose 205 mg/dL, and an ESR and C reactive protein being 76 mm/hr and 380 mg/Lrespectively. Stool Clostridium difficile toxin PCR was positive. The stool sample collected was near solid in consistency.A diagnosis of Clostridium difficile associated enteritis was made, and the patient was started on oral metronidazole 500mg three times a day. Her symptoms of abdominal pain improved and after 5 days of therapy her oral intake was better and a repeat CT scan showed interval improvement in small bowel thickening (See figure series B). 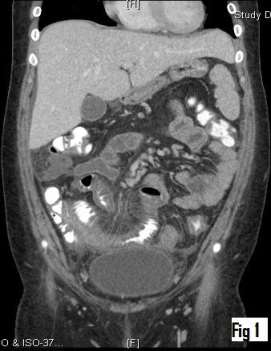 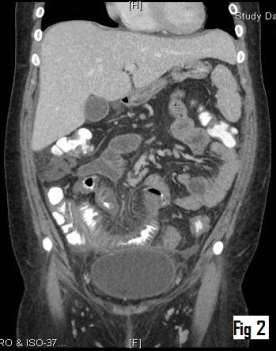 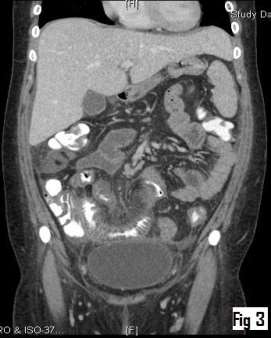 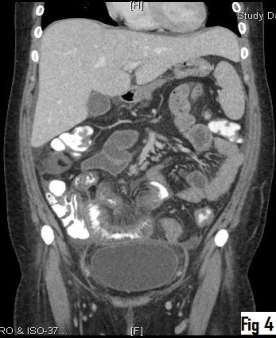 Fig series A: CT abdomen with contrast showing longitudinal sections of the abdominal cavity. (Fig 1 to 4 demonstrate anterior to posterior cut sections). Thickening of the small bowel in the right lower quadrant consistent with inflammatory changes was observed. No colonic involvement was observed. 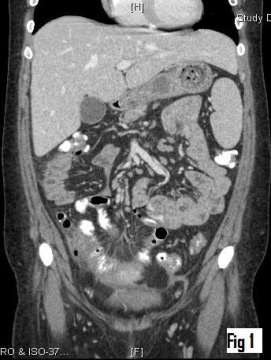 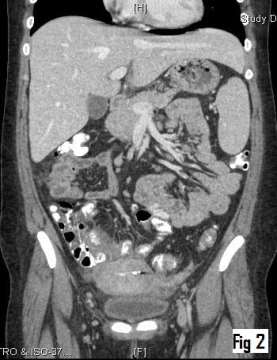 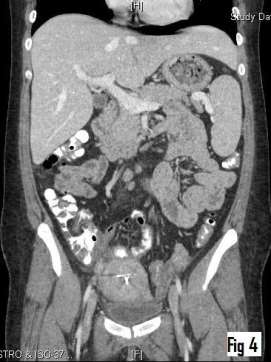 Clostridium difficile is an anaerobic gram-positive, spore-forming, toxin-producing bacillus. Clostridium difficile associated diarrhea from colitis is a very common entity due to increased use of antibiotics. Enteritis from Clostridium difficile is very rare. Our patient developed Clostridium difficile enteritis as a community acquired infection. She never used any antibiotics in the past and the reason for her to develop enteritis was unclear. Although we postulate that the patient had developed gastro paresis from herlong standing uncontrolled Diabetes. Reduced gastric acid secretion (1) and consumption of meat products (2) have been associated with increased risk of C.diff infection. Our patient had small bowel thickening on CT scan (see image series A) with positive C.diff in the stools. She slowly improved with metronidazole 500 mg thrice daily. A repeat CT scan 5 days later (See image series B), showed improvement in small bowel thickening. The patient’s abdominal pain also resolved. The patient was subsequently discharged home, with recommendations to follow up with gastroenterology for work up of possible inflammatory bowel disease predisposing to her enteritis, but she was lost to follow up and her underlying risk factors could not be assessed.

Based on the literature analysis done by Dineen et al, there have been a total of 83 cases reported so far (3). Frieler et al in 2001 reported a total of 9 cases that had occurred prior to 2001 (4). A total of 74 cases since 2001 have been reported. We are not sure whether the increase in the number of cases is due to increased incidence or increased detection. Most of the enteritis cases that have been reported in the literature generally have had underlying co-morbidities like crohns, ulcerative colitis or colon cancer (5, 9, 12). Williams et al and Peacock et al in their reports describe patients with ileostomy after colectomy that had developed Clostridium difficile enteritis (6, 7).C. difficilesmall bowel enteritis may be associated with a higher case-fatality rate than that reported withC. difficilecolitis due to secondary enteric necrosis and perforation. (1).Early diagnosis of disease by imaging and toxin detection is of paramount importance in improving outcomes.

Toxin A (enterotoxin) and toxin B (cytotoxin) release

Our average page is

so you get upto 10% more value

If your paper matters, we own all the good words

Getting your paper done is easy when you know the right people.